The philosopher Francis Bacon had a habit of saying that men are “Dwarfs on giants’ shoulders”, in other words, contemporary men base their everyday existence on their forefathers’ legacy and this is not always clearly visible.
The present-day city of Reggio Emilia itself is built on the ancient site of the Roman town, founded by Consul Marco Emilio Lepido as a forum (civil settlement). The main street that crosses Reggio Emilia is still named after him: via Emilia.
The ruins of the old Roman town and those of the ancient Forum, which was discovered in the ’80s underneath the head offices of the Credito Emiliano Bank, are still hidden below the feet of its modern-day inhabitants.
The Regium@Lepidi project was created by Dagaba and by Duke University, under the direction of Professor Maurizio Forte in cooperation with CREDEM and Lions Club, with the aim of virtually recreating the ancient Roman town at the height of its expansion and glory during the first century A.D.

The exhibition is housed in the Roman rooms of the Reggio Emilia City Museum, one of the first in Europe to use the new approach to virtual museums; it is the final result of the long and meticulous work of a team of experts in different fields ranging from Archaeology to Geology, from Topography to the use of the most modern laser survey technologies.

Wearing the modern virtual glasses “Oculus Rift”©, visitors can stroll through and explore the forum virtually, discovering its monuments through the eyes of its ancient inhabitants and finally fly over the old Regium Lepidi town admiring it from above. 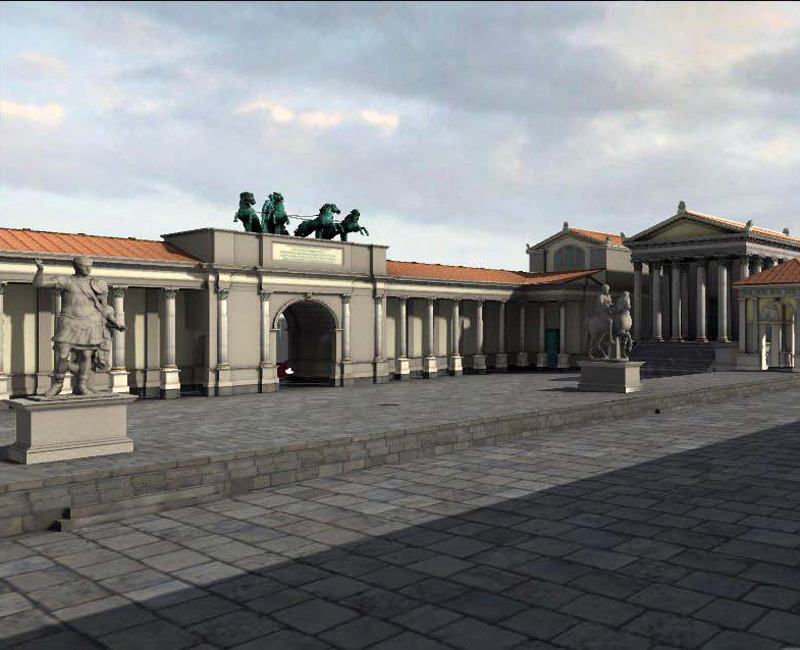